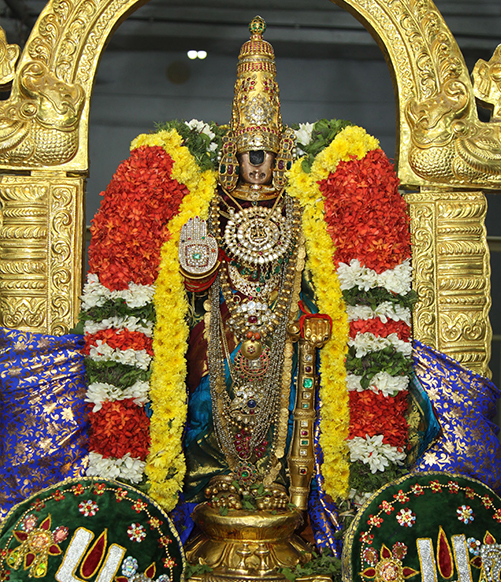 The abode of a deity often described as Nam Perumal and Azahagiya Manavaalan, Tamil for “our god” and “beautiful groom”, the magnificent Ranganathaswamy Temple is home to Lord Ranganatha, a form of Lord Vishnu in a reclining pose.

Considered as one of the eight sywayambu kshetras of Lord Vishnu as per Alwar – the tradition of Tamil Nadu’s poet saints – its glory has seen it become the only temple to have been praised by all of them in their hymns. Together, they created as many as 247 pasurams or hymns in praise of the temple and its presiding deity.

Often referred to as the world’s largest functioning Hindu temple spread over a155 acres complex, it is also home to the tallest gopuram or temple tower across all South India. In fact, its rajagopuram makes for architectural grandeur at 237 feet above the complex base, moving up in 11 ascending tiers.

Tiruchirappalli is the fourth largest state in the city of Tamil Nadu. It is one of the oldest inhabited cities of the state. Situated amidst the Shevaroy Hills and the Palani Hills, it is surrounded by agricultural lands. Famous for its rich and varied cultural and architectural heritage, the city boasts of various significant sites that accentuates the influence of dynasties that reigned over the city, especially that of the Chola Dynasty and the British Raj. And a landmark epitome of this culture and history, right from the Chola dynasty to the reign of Krishnadevraya, has been the Srirangam temple. Srirangam Temple shows the intricacies of the architectural changes throughout its inception to the present-day. Each wall of the pillars is an architect’s and archeologist’s paradise. You can find historic inscriptions on the walls in various languages such as Sanskrit, Kannada, Tamil and Marathi. Apart from the temple, you can also visit the Butterfly Park which is home to some of the most beautiful butterflies. It also includes a collection of trees that resemble the zodiac signs and stars in Indian astrology. You can also visit the Rockfort which stands tall on an ancient rock and was built by the Pallavas and Pandyas.

Srirangam temple is known as one of the world’s largest functioning Hindu temple. It is also one of the most significant of the 108 Divya Desams or Vishnu temples. It is the resting place of Lord Vishnu and includes over 80 shrines of Goddesses like Laxmi and Saraswati across the vicinity.The Srirangam temple is heavily influenced by Dravidian architecture and is enclosed by humongous rampart walls and gopurams. The Rajagopuram which is the tallest in Asia is at 237 feet above the complex base.Along with that, visitors can find themselves surrounded by seven prakarams that portray the seven chakras that run through our physical beings. Inside the compound area, you also have 39 grand pavilions. Millions of people from across the world come to take in the scenic beauty of the temple and blessings of the Lord Ranganatha.